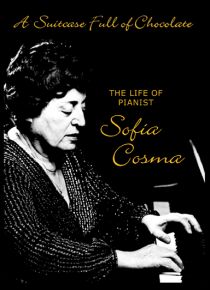 A Suitcase Full of Chocolate

The life of pianist Sofia Cosma - a documentary
# THDVD-78

A documentary thirty years in the making:

The story of Russian-Jewish pianist Sofia Cosma, a phenomenal survivor of the cataclysmic events of the twentieth century, a great musician and teacher whose musical career was lost and found after many years of imprisonment and hard labor, and a devoted mother.

Sofia Cosma took high honors in the Viennese International Piano Competition of 1933. When Hitler invaded Austria in 1938, the young prize winning Jewish pianist was forced to abandon her musical studies in Vienna and return to her home in Latvia. Subsequently she was arrested and sent to labor in a Soviet prison camp. Because she had lived in a German speaking country, the Soviet’s considered her a prime espionage suspect. Ironically, this injustice saved her life, for the entire family Sofia Cosma left behind was killed by the Nazis.

Staving off hunger and cold for seven years of imprisonment, Sofia thought that she would never get out alive, let alone resume her career as a musician. But survive and triumph she did, through an extraordinary chain of events. While in the labor camp, she married a fellow prisoner from Romania and gave birth to a child. She was then released and separated from her husband for two years. Ultimately, she reunited her family in Romania, raised two children, and, after fourteen years of not playing the piano, became one of the most celebrated pianists of eastern Europe!

The documentary on Sofia Cosma was begun in 1980, at the time of her defection from Romania to the United States. In 1990, Cosma made her emotional return to Russia to play with the Moscow Philharmonic as an internationally celebrated artist, an American citizen, and an uncommonly free woman. Well into her nineties, she continued her work, passing on her art through her teaching. This documentary will have special appeal for seniors, in that the extremely productive life of this artist at her advanced age, and after enduring a long period of extraordinary hardships, is very inspiring. It is a mature woman’s story which speaks powerfully to students and to the Jewish community. The film will also be a source of encouragement and uplift to immigrants from all parts of the world. The story of Sofia Cosma is particularly relevant to our time. Americans have recently become aware of the human face of Eastern Europe and Russia along with the remarkable political developments in those parts of the world. Great public interest has come about along with that awareness. This is not the story of a super star. As the document of a triumphant survivor and a fine musician, it is much more interesting.

This is a video DVD.